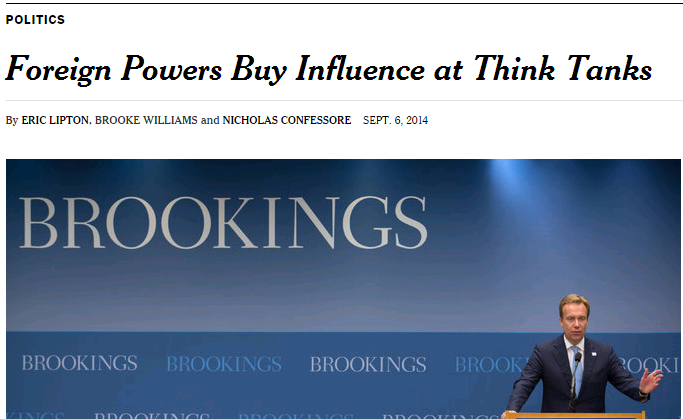 This morning, one of my key secret intelligence sources (code name: MOM) alerted me to the appearance of a big New York Times exposé of foreign-government funding for U.S. think tanks seeking to influence domestic policy.

The article starts this way:

The agreement signed last year by the Norway Ministry of Foreign Affairs was explicit: For $5 million, Norway’s partner in Washington would push top officials at the White House, at the Treasury Department and in Congress to double spending on a United States foreign aid program.

But the recipient of the cash was not one of the many Beltway lobbying firms that work every year on behalf of foreign governments.

It was the Center for Global Development, a nonprofit research organization, or think tank, one of many such groups in Washington that lawmakers, government officials and the news media have long relied on to provide independent policy analysis and scholarship.

70 pages of correspondence between CGD and Norway are posted on the NYT site for your perusal—more exciting in prospect than in the reading, I find, even though I know and care about the correspondents. I don’t know how the documents were obtained.

(I worked for CGD for most of its history, and this year it has been an occasional client. I may well “consult” more for CGD, but there are no plans or discussions of such at present.)

The article may well be right in implying that CGD should have registered under the Foreign Agents Registration Act, as CGD’s Todd Moss is quoted as frankly acknowledging. But I’ll have to leave that for the lawyers.

Is anything deeper wrong with this picture? Not that can I see.

Ah well. The NYT has something worth saying, and played it up for attention. Now that my secret past as a foreign agent has been exposed, I’ll admit that think tanks sometimes do that too.

But no Pulitzer for this one, please.

Updates
Agents de Nevers and Seymour explained to me that the Norwegian government publicly posts all correspondence relating to projects it funds. That transparency made possible the NYT’s access.

Official responses from CGD and Brookings.

Enrique Mendizabal, Think tank accountability: are they really just hired guns or is it slightly more complicated than that?

Daniel Drezner, Why I’m not freaking out too much about the foreign funding of American think tanks

Till Bruckner, Fund a think tank, buy a lobbyist?