Political compromise is not mathematically beautiful

The new formula has one other key component, and this I missed in my last writing despite a strong hint from Jon Lomøy, director of the OECD’s Development Co-operation Directorate, at a CGD meeting in October. Recognizing the concern that I and others voiced that disproportionately rewarding lending to the poorest nations risks a replay of the debt morass of the 1980s and 1990s, the DAC agreed to impose a countervailing concessionality standard on each loan. In contrast with the old 25% minimum grant element, a new 45% floor is set for loans to low-income countries: loans to them must be calculated to be financially equivalent to an outright grant at least 45% as large. On the other hand, the floor drops for wealthier countries: to 15% for LMICs and 10% for UMICs.

I must say, all these new numbers left me scratching my head. So I made some graphs. They didn’t help as much as I had hoped.

First, I modeled a loan with a fixed interest rate, a five-year grace period, and equal, semi-annual principal payments thereafter. With these assumptions, the graph below shows the highest interest rate a donor could charge and still have it count as ODA, as a function of the total term of the loan. I use the current value of the IMF unified discount rate, 5%, which with the 1%/2%/4% adders becomes 6% for UMICs, 7% for LMICs, and 9% for LICs: 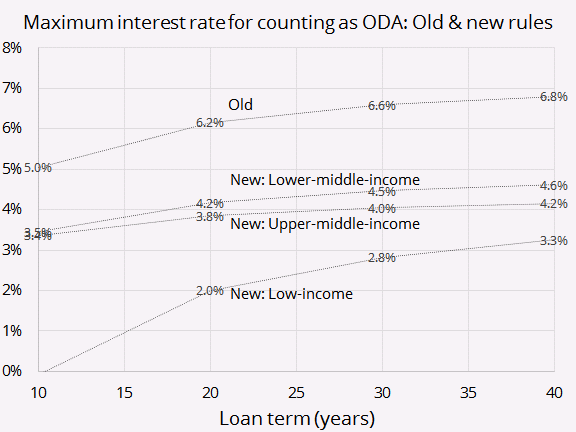 We see, for example, that for a 20-year loan, a donor could charge up to 6.2% under the old system and have it count as ODA—regardless of how poor or rich the borrower. Under the new system the limit falls to 4.2%, 3.8%, or 2.0% depending on the GDP/capita of the borrower; the limits would rise or fall in the years ahead if the IMF adjusted its benchmark. Notice that the limit is loosest for the middle of the tripartite classification of nations. A 20-year loan at 4% will count as budgetary ODA “effort” if it goes to LMIC El Salvador, but not if it goes to UMIC Brazil or LIC Mozambique.

That Goldilocks pattern—the most-favored loans go to countries that are neither too poor nor too rich—manifests the compromise the DAC has struck between recognizing the costs donors incur by lending to poorer nations and, on the other hand, not contributing to the costs donors might impose on borrowers if they collectively lend too much.

Not captured in that graph is the degree to which a loan will count toward ODA, which, happily, will now depend on the terms of the loan. This graph calculates that degree for various interest rates, again for the case of a 20-year loan with 5-year grace period: 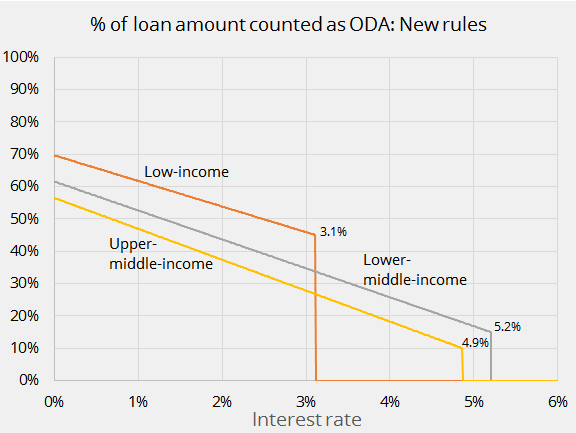 The graph shows that a 0% loan to a low-income country would count toward ODA at 70% of face value, and gradually less as the hypothetical interest rate rose toward 3%. Once the rate hit 3.1%, it would run afoul of the new 45% minimum for low-income countries, and would count 0% toward ODA. As a result, below 3.1%, loans to LICs would be the most rewarded; above 3.1% they would be the least rewarded.

Meanwhile, at any interest rate below about 5%, the loan would count slightly more as aid if it went to an LMIC instead of a UMIC; but as we saw before, the interest rate could still go a bit higher for the poorer of those two groups, 5.2% instead of 4.9%, while remaining within the golden circle of ODA.

If the hypothetical loan were for 30 or 40 years instead of 20, then these lines would stretch a bit more to the right before crashing to 0%. If the IMF benchmark rate fell to 4% or rose to 6%, then the lines would fall or rise in tandem. Either way, the picture would be similar.

If you are struggling to absorb this graph, you are not alone, because I am in your company. I cannot motivate it pithily. Yet it is the most concise explication of the DAC’s new formula that I can conceive of. I’m glad the DAC didn’t take on relativity, because instead of E=mc2, we would have gotten E=m2c2–(m+1/2f)±yesterday’s temperature, except on Thursdays.

But it would be silly for me to express shock at the messiness of the outcome. People with strong, sincere, and intelligent, yet contradicting, views had to compromise on a question that admits no answer as clean as the laws of physics. Capacity to compromise is a virtue, and it was demonstrated here.

Of course, traditional politics and nationalistic biases also played roles, as each country maneuvered to preserve its standing in the ODA stats. But that should be no cause for surprise or disillusionment either. Presumably all this happened back in 1972 when the DAC picked a 10% discount rate and a 25% grant element minimum. The numbers were round and fairly arbitrary and biased toward increasing ODA totals. But they worked reasonably well for a long time. Now we have a new set of round and fairly arbitrary numbers, which, one hopes, will work reasonably well for a long time.

On balance, I welcome the DAC’s decision to:

As I’ve written before, I hope the DAC reforms will increase disclosure of lending activities, beyond the current bounds of ODA. That will make it easier for parties outside the DAC to run the numbers their own way.