The ODA rule changes: Who’s up and who’s down?

Last year I blogged much about how the Development Assistance Committee (DAC) should revise the definition of Official Development Assistance, particularly in its treatment of loans. Then in December, the DAC members made their decision. Some changes I advocated (though hardly with originality), entered the revised definition of ODA. Others did not. On the day of the announcement I blogged my reactions and some preliminary analysis.

Now I am revisiting this matter as I prepare for an IMF-organized conference next month in Geneva.

To recap, the DAC decided to:

These changes will be phased in over the next few years. I endorse most of them. I do think the IMF benchmark, with its long time lag, is inferior as a measure of a donor’s current lending costs to the OECD’s own Differentiated Discount Rates (DDRs), which were themselves designed for almost exactly the purpose at hand. (If interest rates begin a sustained rise, then the laggy IMF benchmark could start to look too low. And if only US interest rates rise, EU donors could borrow cheap and on-lend at rates benchmarked against the roomier US-based standard.) Meanwhile, I came down against factoring in default risk ex ante as the DAC has chosen to do, while acknowledging the coherence of that idea. Also, the DAC’s coarse differentiation of countries by income group and the two new triplets of numbers—4%/2%/1% and 45%/15%/10%—are mathematically ugly, which is why they lead to some strange results.

What do these differences amount to in practice? Here are graphs for 1993–2013 for the three largest ODA lenders, France, Germany, and Japan. The grey bars show the annual total flows of loan disbursements, principal repayments, and interest payments. Superimposed on them are lines showing how those flows translate into total loan-related ODA under four definitions. “DAC old” is the traditional standard, meaning disbursements minus repayments (but not interest). “DAC new” incorporates all the reforms the DAC announced. “DDR” is like “DAC new” except that it uses DDRs instead of the IMF benchmark rate, leaves out any discount for default, and imposes no minimum concessionality filter. (Loans with a 5% grant element still count, just at 5 cents on the dollar.) “DDRR” restores risk discounting (the second “R” is for “risk”), but using the OECD’s system for export credits (see my paper for the Center for Global Development).

To the extent that last year’s negotiations within the DAC were a fight over whether to let France and Germany count loans that charge enough interest to make them potentially profitable, the result appears to be a compromise tilted somewhat against them. France and Germany’s “DAC new” totals for 2013 are about a billion dollars lower than the “DAC old” ones. But their totals do not fall as low as they would have if the DAC had continued to eschew discounting for default risk and used the more realistic—and currently lower—DDRs instead of the IMF unified rate. (This counterfactual is represented by the “DDR” lines above.)

Meanwhile, Japan gains from the change. Net flows on its lending (disbursements of new loans minus repayments on old) have approximated zero since the financial crisis, contributing little to old ODA; but since Japan’s new loans are cheap enough to bestow some grant element, they look positive in the new system, with its focus on grant elements rather than net flows.

This table shows headline numbers for 2013: total ODA and ODA as a share of gross national income (GNI). As far as I know it is the first public confrontation of the old and new systems. Bolded are the most affected countries. Perhaps by design, the impact on total ODA is practically nil. 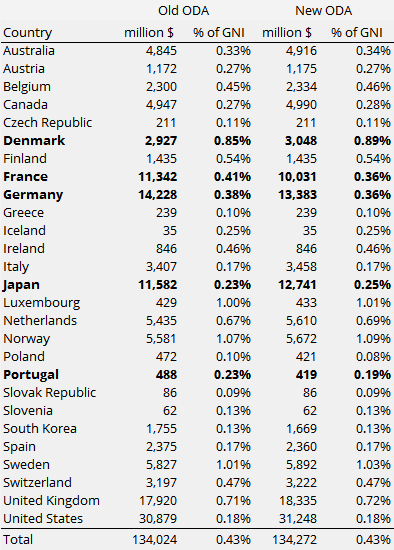 Soon, I will add the variables graphed above to my aid data set, in case they are useful to scholars and even advocates.